Building a skull with glowing eyes that follow you around as you move.

And on the day. It felt successful - people noticed and liked the overall look, some noticed the eyes themselves, others were intrigued when they were told and did the "back-and-forth" dance to see it happen. One little girl wanted to be its friend. And one kid kept saying "Happy Halloween?" to it over and over, looking like he expected a response! So I was happy. More improvements for next year! 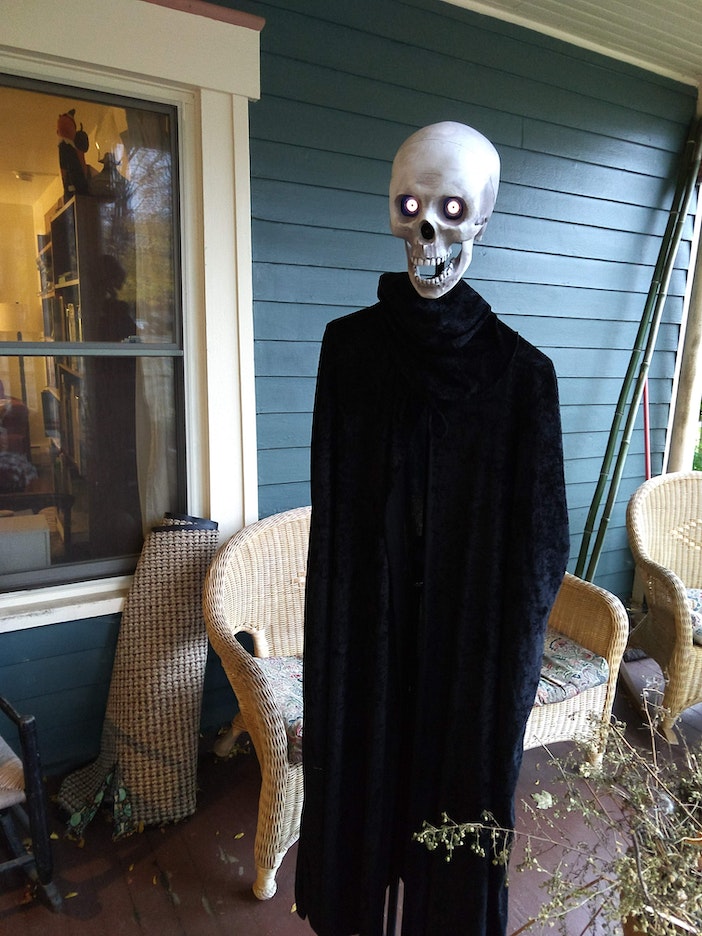 Timothy Weber 1 November 2019
Finished skull mounted in place on the porch, in daylight. 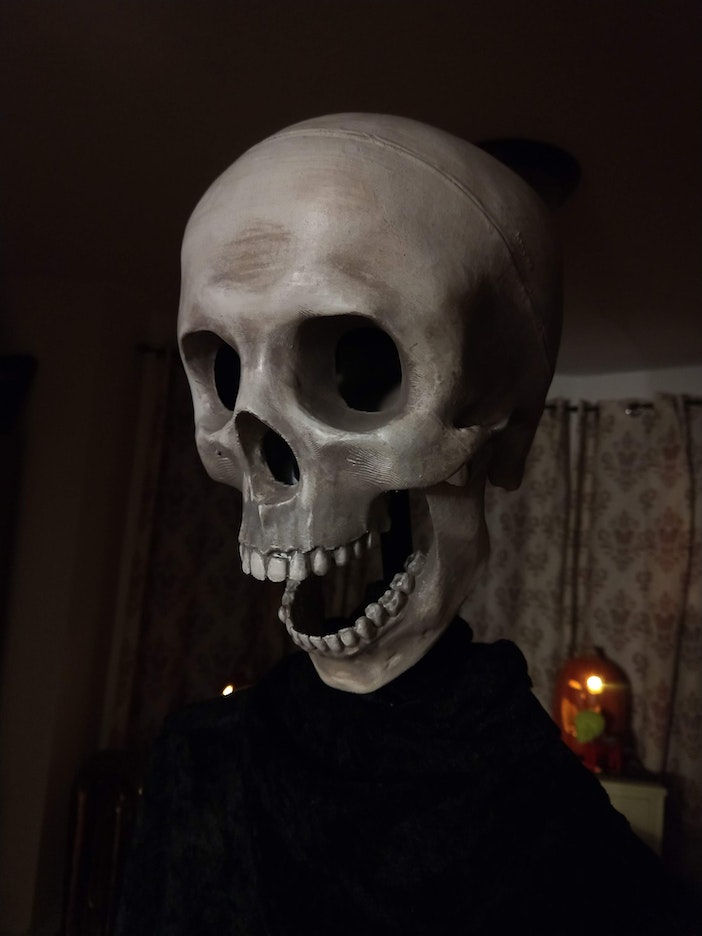 Timothy Weber 30 October 2019
The final 'weathering' paint layer, on the stand, without electronics

Still waiting for the "weathering" paint layer, but I did a dry run to check out performance in situ. I'll tweak it a bit more if there's time, but I think it's working pretty well!

Timothy Weber 30 October 2019
Approaching the skull on the porch, in daylight.

The first coat is dry enough that I could assemble it. Couldn't resist mounting it to get a sense of the overall effect (sans electronics). I initially envisioned it on a bamboo pole buried in the ground, but there's 100% chance of rain for Thursday, so I think a microphone stand on the porch will have to do.

I need to hide the seam on the top a little better - I think just applying a bit more base coat from the front with the parts assembled should help. 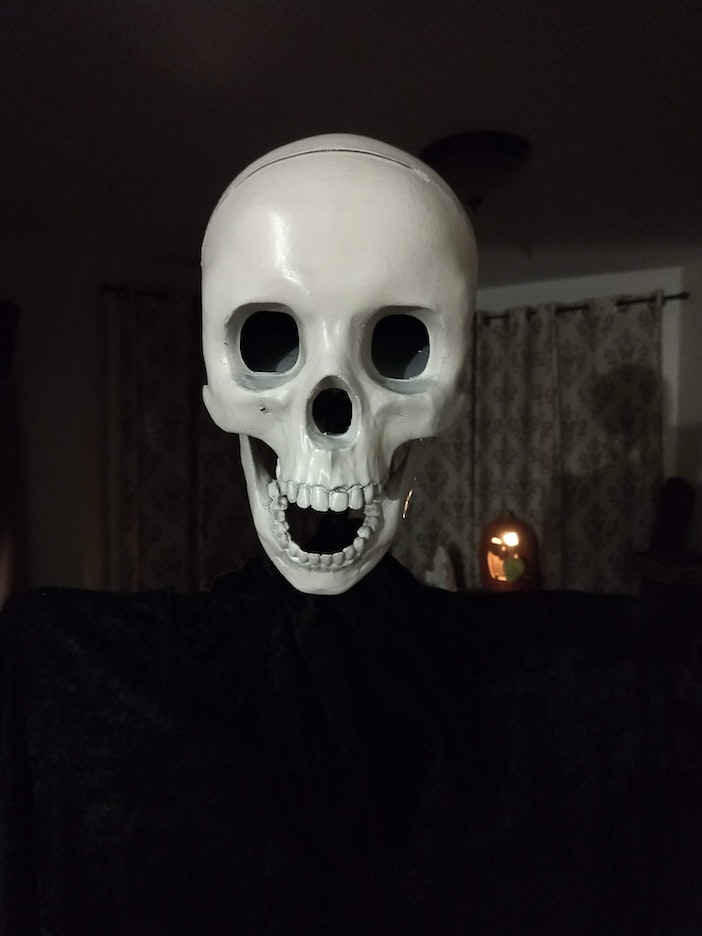 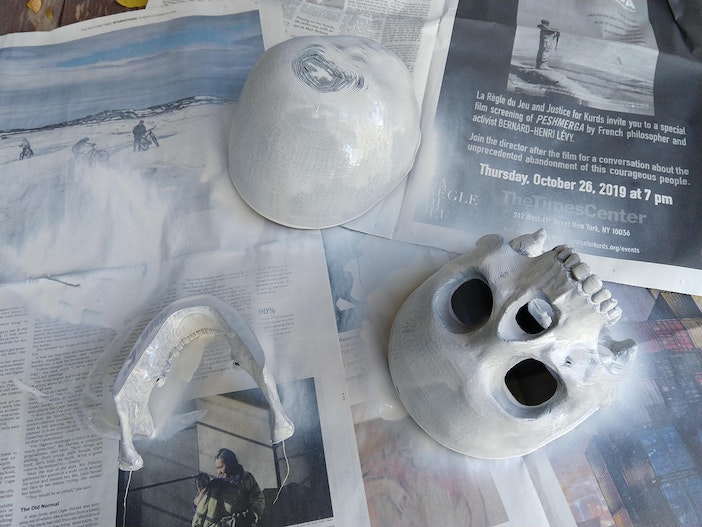 Great progress today - the face is cleaned up, the jaw attachment is working great, and I've got the masked the edges of the displays with electrical tape and made a felt sweater for the camera board, so neither of them leaks light or reflects much. Starting to look like the finished product (though the wrong color still).

This print finished and looks gorgeous! 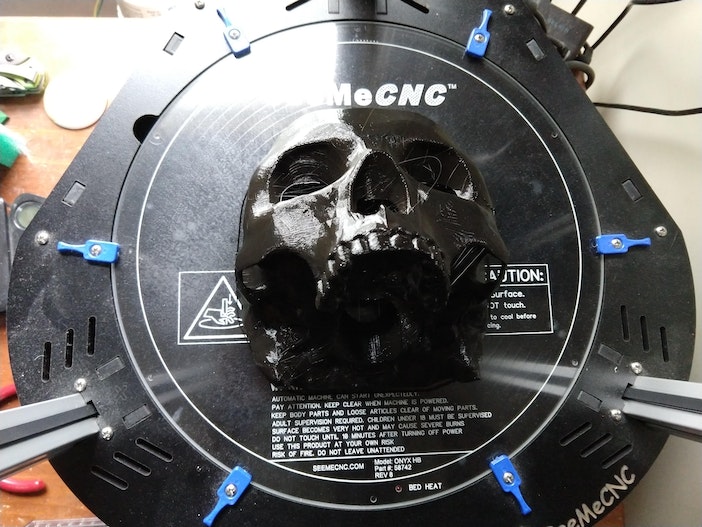 The final 3D printing is moving along well. The printer died a few hours into the 13-hour print, but on the second try it's nearly finished.

And we have a winner. This adds a layer of Krylon "Chalky Finish Mink" spray paint, immediately wiped off with a paper towel, and then some hand-daubing the high spots with more of the light base layer. The layer lines don't look as prominent in person; it just looks nicely weathered. I'll be duplicating this on the final product. 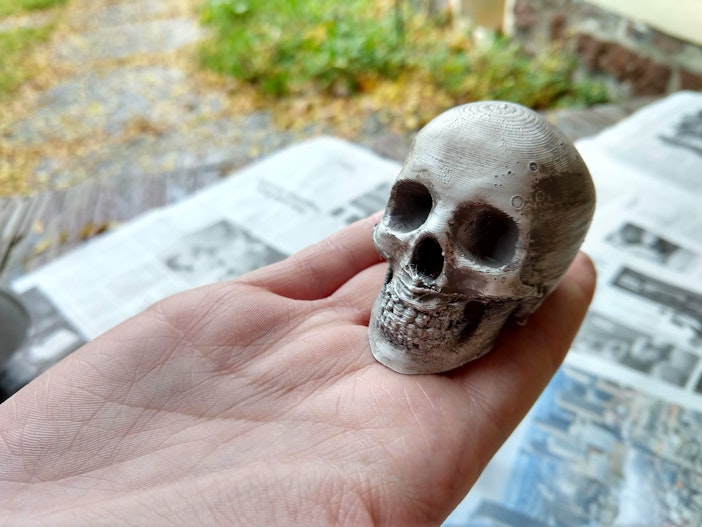 I think this technique is going to work fine. The spray paint does a sufficient job of smoothing out layer lines, makes the plastic more opaque, and gives an unevenly-colored surface that I can further dirty up. I should pop bubbles if they happen in the future, though. 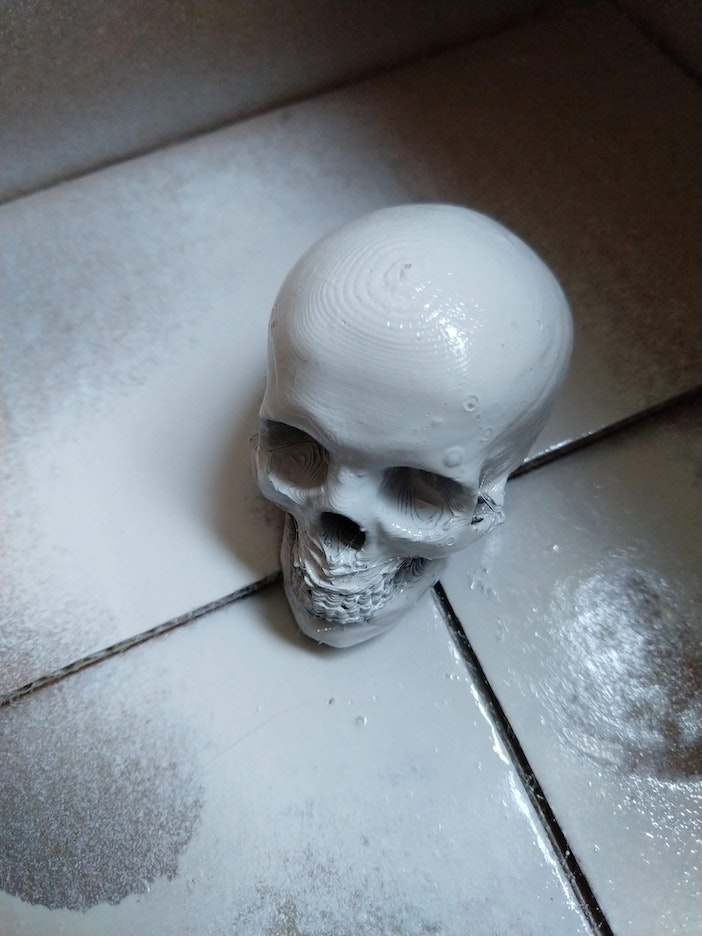 I've also been working on plans for finishing the skull. The plain white print looks pretty plasticky. It would be OK, but I'm hoping I can kick it up a notch.

My plan so far is to print in a dark color, then apply a couple of coats of off-white spray paint, and maybe follow that up with some brown shoe polish. Here's the first test. Then my paint can got clogged.

As is, the paint just highlights the layer lines from 3D printing, which is not what I want. But I'm hoping the second coat will cover those a bit more. And, the layers will be much smaller relative to the size of the final print (this is only a few cm across). 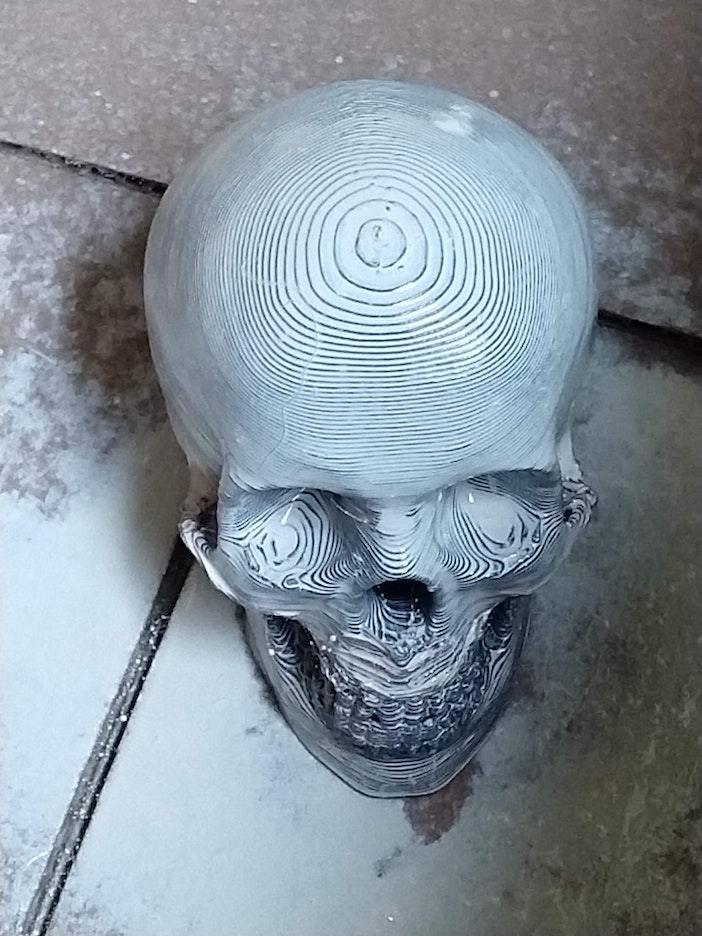 I've solved everything I can think of in the 3D model now. 20 hours of 3D printing later, I hope to have a working final face. I had to deal with plenty of issues:

Hopefully I've thought those solutions through well enough, because there's not much time to re-run two 20-hour prints! 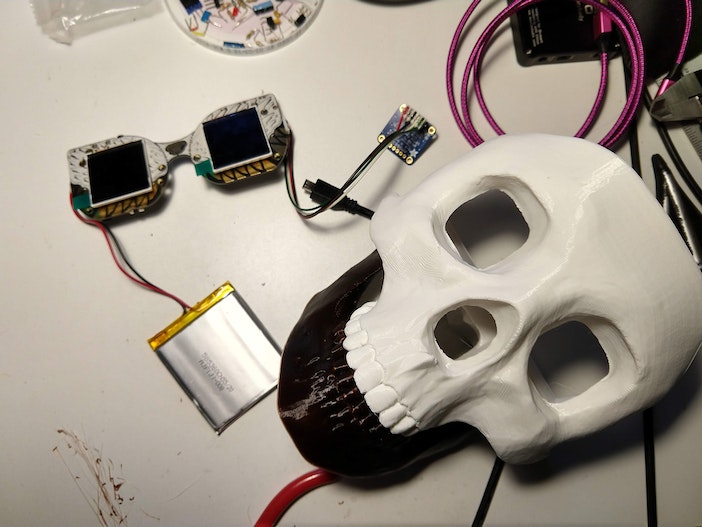 I've figured out the power supply.

I was thinking about running an extension cord to the front yard (where I'm planning to install the skull), to a USB power supply, to a USB cable that would run up the bamboo pole, up into the skull, connecting to the main board.

But: the green bamboo poles I have are not hollow. And, that's a lot of cabling. And I don't need it to run that long - mainly Halloween night, and after 9 all the kids are done trick-or-treating and it's just occasional marauding teens, whose attention I'd rather not attract. Before 6 pm the sun hasn't even set yet. So that's plenty of time.

So: how about the battery pack I've been using to demo this? Well, it's got great capacity, but it's a little too large to fit in the skull.

So: I plundered a 2000 mAh lithium-ion battery from an old project. But is that enough charge?

I've just tested it running off of that battery for 4 hours 35 minutes, with the output voltage still at 3.72 V at the end. Plenty of charge. And the main board has a LiPo charger circuit built in, so I can recharge it just by connecting USB.

Done. Now moving on to finishing the skull model.

The fit needs work in many places, but I was able to cram the boards in and test the effect. I think this just might work!

Mediocre selfie with un-cleaned-up 3D print that fits so poorly I couldn't connect the sensor. Holding it in my hands tells me a huge amount. Lots to fix, but also lots that works. Woohoo! 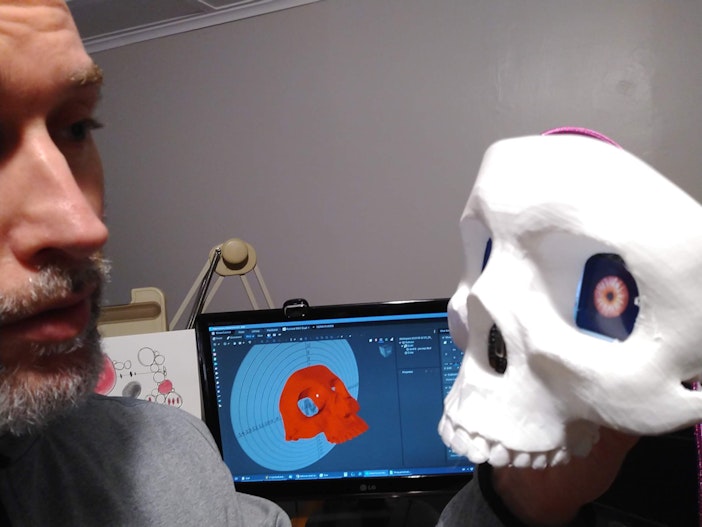 Modeling the cavities inside the skull for placing and accessing the circuit boards. Now I think it's time to hold it in my hands, so this is a cut-down section for 3D printing. 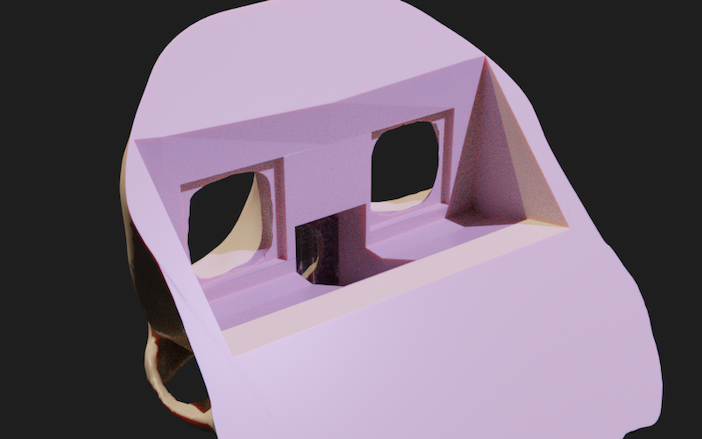 I've finished modeling the eye sockets, and also prepared a little animation to check out the skull from various angles.

A bit more sculpting to leave more space for the mask board. Next I can move on to shaping the eye sockets. 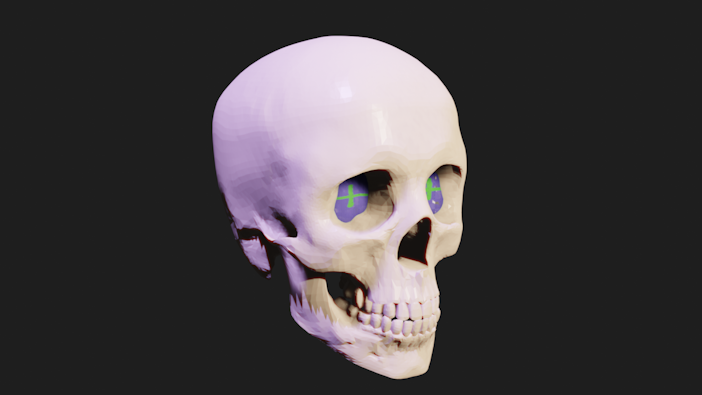